Books on the Plate

This book went with the disappointing ending that I knew it was going towards about the time it started. It had so much potential to be the “fuck you dude” book, but slipped back into the “girls only date shitty abusive boys” novels that have already been brought over. (See: Violet Knight, Silver Siren)

It could have had the plot twist ending where she ended up with the harem too and escaped the game. No, she went with stalker bro and even ditched the much better Eita. Abusive men don’t need to be rewarded for suddenly acting decent. She tells the guy a million times to leave her alone and he doesn’t. He only had a change of heart to suit himself. He’s still getting what he wants, and that’s an object to put into his collection.

What gets me is that she doesn’t ever question her liking at ...

After many trials and challenges, our reborn spider has become very good at fighting (and eating!) monsters. Getting a little full of herself, she's rushed headlong into some unexplored area and now, she's facing her worst enemy...a huge dragon!

The books still have the Shun parts in them and honestly they give more book over t...

After a terrible experience in her past at the National Music Band Competition, Kumiko abandoned music once and for all. She starts her first year at Kitauji High School, she finds herself being roped back in. But their school's band is hopeless. There was a time where they had placed well in nationals, but now they can't even make it past their regional qualifiers...

Tokyo Ghoul: Days by Sui Ishida
My rating: 2 of 5 stars

Going to post this in the beginning but it seems that ViZ cut out some of the character art that was in the book. Found some on the TG wiki.
The author here can’t write women to save his life. All of them are somehow evil or simpering.
These stories would have been better if all of them didn’t involve some kind of violence on some part. They all could have been slice of life, but no we have to throw in random violence to spice the story up. The last story is just written so bad that some parts don’t even make sense. It was also about a guy that spends 5 seconds on screen before he’s killed too.

Overall the whole idea that Ghouls are somehow sympathetic characters is killed when the examples of them we have are viole...

Review: The Stories of Ibis 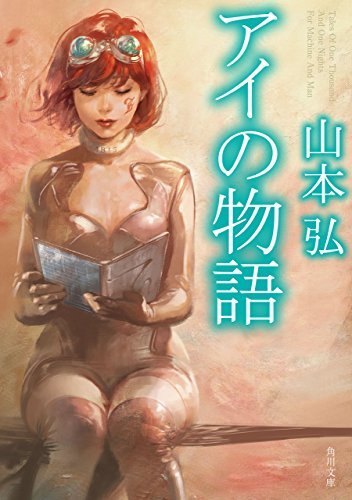 The Stories of Ibis by Hiroshi Yamamoto
My rating: 1 of 5 stars

EVEN A MACHINE HAS ROUTINELY BEEN SEXUALIZED BY MEN AND USED AS A GO TO FOR HOW WOMEN SHOULD BE.

TL;DR: This isn’t some kind of thought provoking book. It’s a typical otaku wank fantasy light novel where all the women are sexualized, android maids think sexual assault is ok, and did I mention all the fetishes.

Here’s all my updates if you just want to read the highlights: https://www.goodreads.com/review/show/1718601690

Let us get a good look at the Japanese cover off to the right because that really tells us more about the book that the kind of esoteric cover that ViZ gave us. You can seen the random skin showing out of the outfit. This was chosen by and otaku programmer that is into “clumsy android girls”...

I tried to keep up with this book after dropping the anime for similar reasons. But this just seems to be a really long economics lesson with the word “BOOBS” and other sexualizing bit added in at times to keep the presumed male readers interested.
Also I think the author says that slavery is inevitable which is bullshit.

View all my reviews

男子高校生で売れっ子ライトノベル作家をしているけれど、年下のクラスメイトで声優の女の子に首を絞められている。 (1) ―Time to Play― (上) by 時雨沢恵一
My rating: 4 of 5 stars

I’ll start off by saying this book is amazingly boring. Now why would I give a boring book 4 stars?
Well, it’s also a nice look into the workings of the light novel industry. The title of this book should be:

How To Get Published As A LN Writer In Japan, Especially Submitting for Dengeki Bunko


Because the amount of info is staggering. SO much info…. that there is no plot. Not for the first volume. It’s hinted at the end, but no meat really. It’s just one big info dump.

This book was inspiring to keep writing...

Kenshin no Keishousha Volume 1 by Kagami Yuu
My rating: -∞ of 5 stars (Negative Infinity of 5 ★s)

This book deserves a negative score. I only got to about 25% before I had to quit. THe piles of misogyny, sexual assault, humiliated in defeat and sexualization in defeat of the female characters is just extremely gross.
The simple fact that that the author doesn’t respect women at all is very pervasive here. The idea that a man is entitled to a woman’s body and that he has a right to do anything to it and she should be somehow grateful for it.
Really there was some interesting plot going on here but the gross sexual assaults and overt misogyny just completely ruins it.

View all my reviews

Ojamajo Doremi 16 by Midori Kuriyama
My rating: 4 of 5 stars

The first 60% of this book is kids fare.
The Witch Apprentices getting back together and updating themselves on what’s going on. The last 30% of the book is where all the action is where they start solving things.
This book is beast read after I think Doremi # where you have all the gangs introduced. However it wasn’t that hard to follow if you didn’t
The translator did a nice job too, adding in snippets for who’s talking as apparently you infer who’s talking by how they speak, which doesn’t translate well into English...

I gave this book an extra star as it seems to deviate from the game and doesn’t kill off it’s women like the game.

So to set this up, Godai Yu actually was working on the game script as well as the novel in Tokyo, but had to quit due to being sick and unable to adjust to Tokyo life. So ATLUS then took what she gave them and ran with it.

However she did write this and it’s pretty bad with it’s female characters. All of them are shown to be weak in some way, Sera literally so. All are sexualized in some way. Sera is the fragile deer that needs and Onii-san to support her, Argilla has a slit up the side of her skirt (in battle?), Jinana is just stated outright. So it fails on that front...